As Tsukasa helps prepare Sae with her duties for the Founders Festival, Junichi is feeling saddened by the lack of time he is spending with Sae as well as how he doesn’t know how to help Sae. While reflecting at home, Junichi reflects with several tapes of Sae in his various movies when he gets an idea to film a documentary of Sae as the head of the Founders Festival this year. While filming, Sae begins to feel more pressure as the days go on but continues on. One day, Miya finds out that Sae is in the infirmary which Junichi rushes over to check. An awaken Sae explains to a worried Miya and Junichi that she was tired from working late at night and went to the infirmary to rest. Ten days before the Festival, Sae and her staff learns the Drama Club overspent their budget and don’t have enough funds to buy costumes and recently learn the Swim Club and the Tea Club needs new equipment. 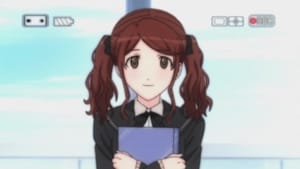