It’s been about ten months since Sae and Junichi have been dating and Sae’s self-confidence has broken her out of her previously shy personality thanks to Junichi. Because of this, she is able to hold conversations with others, be more efficient with her job, and be around dogs owning one herself, though big dogs still scare her. This has also started to make her popular amongst the students as Junichi begins to feel threatened as his classmates are in disbelief that he is Sae’s boyfriend. In response, Junichi goes all out to provide lunch for Sae only to hold up a line, get her favorite sauce picked out by the lunch lady, and to top it off, Sae herself comes to take their food to their table, thus he starts making more of a mental tab of what she likes. After going to the shrine where Sae made a wish, Miya tells Junichi that Sae is going to a hotel for a wedding meeting. 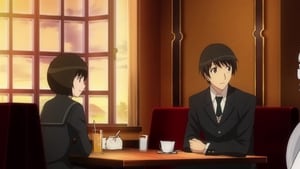