The battle involving the whole Clover Kingdom is finally over. But because of the battle, the kingdom was heavily damaged, so the Magic Knights were busy trying to repair everything. Meanwhile, someone rather unexpected shows up in front of Asta and the others and states three problems that will come up for the Clover Kingdom. Asta and the others are surprised, but just as they were told, someone showed up to try to judge Asta and his devil power. 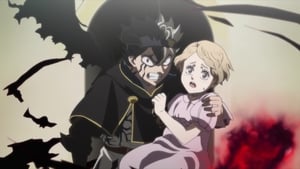