Elis, along with other ranking officers, negotiate with the Japanese government wearing stereotypical school swimsuits, due to misinformation on Elis’ part. Upon returning to Kio’s house, Manami and Aoi visit, again misinterpreting the five Catian women dressed in revealing clothing standing in Kio’s living room. They state their intention to leave, since the events of the previous episode marked them as traitors to their respective factions. Elis tells them that since Kio’s house is now a Catian embassy, everyone inside is protected by Catian laws, and the two girls are invited to live there as well. Later, while the robotic servants are on guard duty and Manami and Aoi are bathing together, one of the robots is abducted by members of a yet unknown faction. Manami and Aoi spring into action, rescuing the robot, although the intruders escaped by use of a stun grenade. The next morning, Manami, Aoi, and Kio are hired by Elis as official embassy employees. 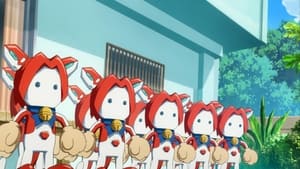