We Have Captured You!

The episode opens on a concert hall filled with members of Underside of Kitten Paw, a fanatic group obsessed with cats. Their leader, Antonia Morfenoss, shows pictures of Elis and declares her to be their new idol of worship. When Kio wakes up, he walks in on Elis dancing and being abnormally energetic due to having smelled silver vine spirits, an Asian plant reported to be stronger than catnip. Dr. Dyureru appears and explains that Elis will soon be going into heat, causing her to have heightened senses, and congratulates Elis on having a mating partner on her first heat, much to Manami’s outrage and Kio’s embarrasment. She also assigns Elis a mission to go into Tokyo and “observe the human economy, technology, and culture”, which, according to Elis, means to bring back a bunch of toys and games as souvenirs. 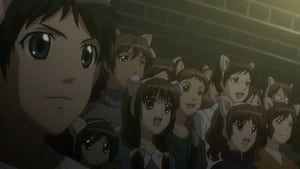