The Throne That Invites War

As Toru, Akari and Fredrika are kicked out of the castle, Red Chaika decides to give her remains to Chaika’s group only to learn from Selma that Hartgen’s men attack and stole if from her. Zita and Leonardo reunite with Vivi and Nikolai and learns Alberic is alive. With Fredrika weaken by Shin’s poison, Toru and Akari have no choice but to give the rest of the remains to save Chaika. After informing his superiors on what happened, The Gillette Squad are ordered to take down King Stephan before any of the Six Nations attack, which will reignite the war. Toru and Akari arrive in Stephan throne room where Stephan, Alina, Irina, Black Chaika, Niva, Guy, Shin and Chaika awaits them with Alberic sneaking in. With all of the remains gathered, Black Chaika “consumes” the remains and starts giving birth with Guy’s help, who reveals he is a magic mechanism to ensure the remains would be gathered. Black Chaika gives birth to a boy resembling Guy but with Fayla body parts who reveals himself to be none other than Arthur Gaz himself. Arthur thanks Black Chaika for using Fayla parts in her to resurrect him and kills Stephan with a spell without an incantation much to everyone shock. As Arthur sits on the throne and grows older, he explains to Chaika the truth that she and her “sisters” were never really his real daughters as the Chaikas were based on his mistress who was killed by Stephan during the war which he uses as a basis for all of the Chaikas looks. Arthur reveals his goal was to gather large amounts of magic fuel using several flying fortresses hidden in space to collect from people’s emotions with war bringing out the most of their emotions. So he allowed himself to be killed and his remains scattered while the Chaikas fought to get them so the dread and fear about him would spread throughout the continent. To demonstrate his power, Arthur and Niva easily destroys a flying fortress sent to attack Hartgen. 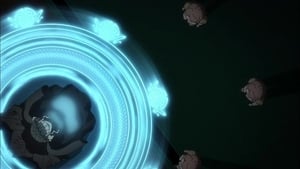