Taiki Goes to Another World!

The story begins with a seventh-grade boy named Taiki Kudō dreaming of commanding a Digimon army. The next day, Taiki spots a red creature flickering in static and hears a mysterious voice which presents him with a Xros Loader, into which the creature is absorbed. He and his friends, Akari Hinomoto and Zenjirō Tsurugi, are then sucked into a portal to the Digital World, where they are attacked by MadLeomon and his troops. The group is rescued by Ballistamon, Starmon, the Pickmon, and the mysterious red creature: Shoutmon. After Taiki and his Digimon companions fight back against MadLeomon and his troops, MadLeomon absorbs some Chikurimon, Troopmon, and Mammothmon to become Armed MadLeomon. Taiki uses his Xros Loader to allow Shoutmon and Ballistamon to DigiXros into a more powerful form. After injuring Armed MadLeomon, Shoutmon then uses the DigiXrossed Starmon and Pickmon, in the form of the Star Sword, to strike down Armed MadLeomon with a finishing blow. 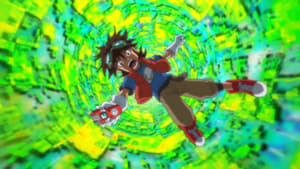