Heaven Zone, The Snare of Paradise!

In Heaven Zone arena, a crowd of Digimon are watching a Gargoylemon and GuardiAngemon (commanders of Heaven Zone’s Police) executing a Puttimon who broke laws. Meanwhile, Xros Heart arrives at the Zone and amaze by the surrounding. Later, Taiki falls off a cliff but is saved by Shakkoumon. Dondokomon drums disrupting a Pucchiemon orchestra and gets in trouble with a police Piximon. Taiki tries to stop the argument caused by Dondokomon as Lucemon shows up to clean the mess. After the argument is off, Lucemon tells Taiki and the that Gargoylemon is a member of the Heaven police. Lucemon then takes them on a balloon tour, but Dondokomon knocks down a sculpture. Gargoylemon arrives and arrests Dondokomon, Taiki, and Shoutmon. Moments later, Taiki teammates and Lucemon visit the police department where they are told that Dondokomon is being interrogated. Ballistamon ends up busting Taiki, Shoutmon, and Dondokomon out which alerts the rest of the force. 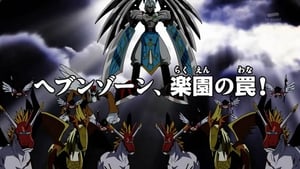