As the dark energy ball engulfs Lucemon Chaos Mode and Nene, Sparrowmon tries to grab Nene but fails as the energy digivolves Lucemon into his Shadowlord Mode with the girl trapped in the Gehanna sphere. As Lucemon takes off, Sparrowmon attacks him to rescue Nene as Shoutmon ×4 and Beelzebumon also involving in the fight too. But neither the Xros Heart Digimon or Sparrowmon could stop Lucemon as he siphons all the dark energy from the Heaven Zone’s darkness-infected citizens, growing bigger as a result while a Monitamon informs DarkKnightmon on the current situation. While Xros Heart regroups to figure out how to defeat Lucemon, Nene reflects on the time when she was with Sparrowmon. Sparrowmon wakes up in Xros Heart’s care as Lucemon starts to absorb the Heaven Zone as Shoutmon ×4, Beelzebumon, and Shakkoumon are unable to stop him. Without the help of DarkKnightmon, Sparrowmon tries another attempt at Gehanna with Taiki using the Patamon DigiMemory so Shoutmon ×4 to support her. 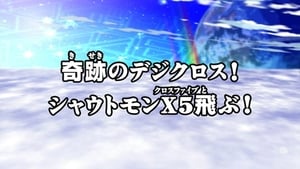