The wave of darkness that Taiki is ensnared by is revealed to be DarkKnightmon’s action in an attempt to recruit Taiki. It turns out that Taiki pure heart revokes the dark energy of an orb stored by DarkKnightmon, leading the discards of Taiki off a tower. Luckily, Taiki is saved by Akari and Dorulumon, though his Xros Loader is stolen by a Garbagemon who escape onto a Kettle the Trailmon with his teammates who consist a groups of MetalMamemon and ShadowToyAgumon. During the pursuit, Taiki, Shoutmon, and Dorulumon end up caught between the train tracks as different Trailmon pass by, that is sending trashes all around. Taiki then has an encounter with Puppetmon. Through Puppetmon, the gang soon learns about the tyrant Digimon GranLocomon is ruling the Dust Zone. When Taiki mentioned about Xros Loader, Puppetmon’s behavior was turn rapidly by offering himself to Taiki for searching it. 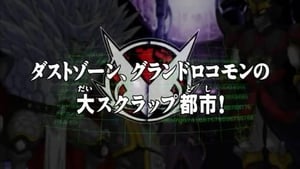