Xros Heart are forced to fight DarkKnightmon and Kiriha, managing to escape them with Puppetmon’s help. Later, Sparrowmon arrives, persuading Taiki to save Nene along telling him DarkKnightmon’s intention to form a Darkness Loader for his own sake. Later, DarkKnightmon offering Lilithmon to work together to finish up the Xros Heart. Deciding to save Nene, Taiki is stopped by Kihira but Taiki managed to snap him out of DarkKnightmon’s control. Kihira instead team up with Shoutmon ×4 to battle against DarkKnightmon and Lilithmon along with their army. Taiki and Sparrowmon managed to save Nene and returned to the battle field and soon DigiXros Shoutmon into Shoutmon ×5 and wipe out the Guardromon. Puppetmon later throws a MetalGarurumon DigiMemories at Taiki and he activates it and with the power of MetalGreymon’s Cyber Launcher, Taiki razes the remaining Tankmon. 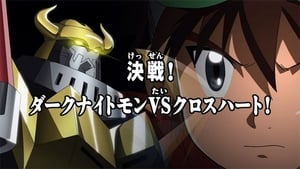