As Xros Heart meet the Monitamon of the Shinobi Zone, who have been following their exploits through the Monitamon under Nene, they learn that Blastmon’s general Musyamon has taken over most of the Shinobi Zone. They visit a Monitamon training camp and learn that the Monitamon Princess has been taken hostage by Mushamon, who wants the Code Crown in exchange. Just then, a Shurimon arrives and tries to attack the Monitamon Elder, but leaves in exchange for a Samurai DVD. After trickily getting everyone up a cliff, Zenjirō falls off but is saved by a group of Etemon. They are then led to the lair of Karatenmon, who will only give up the Code Crown if someone can make him laugh. Everyone puts on their own acts to make him laugh such as Shoutmon’s DigiXros with other Digimon, but with no result. However, Nene, who has lightened up a bit more, joins Akari in a comedy sketch which successfully makes Karatenmon laugh. 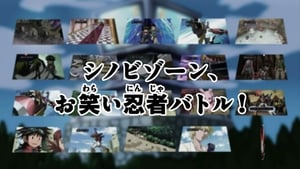