In the Disc Zone, Kiriha has just obtained the Code Crown from Mercurymon and encountered with Blastmon where soon they started a battle. Xros Heart arrived and discovered the destruction made by DeckerGreymon (Kiriha’s newly DigiXrossed Digimon) and Blastmon. Taiki tries to intervene the battle with Shoutmon ×4K but undesirable result occurs, as a sudden Xros open happens to Shoutmon ×4K, resulting the battle to become even worst. Just then, the ground collapses sending Blastmon out of the battle and separating Shoutmon, Greymon and MailBirdramon from the others. Realizing Disc Zone is continuously collapsing, Taiki fail to persuade Kiriha to save the Zone. Soon, a Bulbmon is unleashed by Blastmon to extend the chaos. Reunited with Taiki, Shoutmon is again forms into Shoutmon ×4K, which later starts to weaken again and Bulbmon almost crushes him. Greymon unexpectedly steps in to assist him by flipping Bulbmon over together and destroy him. 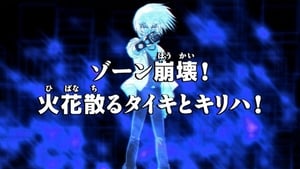