Shoutmon, Proof of a King!

As the Disc Zone collapses, Taiki quickly transfers all the Digimon over to Shinobi Zone. However, fragments of Blastmon cling onto some of them and attacks them as night as revealed to Taiki by Wisemon. Beelzebumon soon arrives and DigiXros with Deputymon to destroy the pseudo-Blastmon. Later, Shoutmon gets some personal training from Ballistamon and Beelzebumon in order to prove himself as a strong Digimon, able to become the Digimon King. A Digimon named Tuwarmon appears during the training and informing them that Blastmon’s arrival to the zone before leaving. As Blastmon arrives, Shoutmon ×4B fights against him, pledging to protect the people around him. Shoutmon ×4B is then further DigiXros into Shoutmon ×5B and defeated Blastmon while gaining most of his Code Crowns. Meanwhile in a now-ruined Disc Zone, Tuwarmon revealed to be DarkKnightmon’s spy, planted into the Bagra Army under the guise of Damemon. 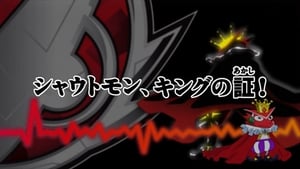