The Ultimate Weapon Activates! You Can Do It, Cutemon!

Xros Heart find themselves into the Sweets Zone’s underground and with the impression that Cutemon’s parents are among them, Taiki and others attempt to search for and save everyone only to find themselves surrounded by Raremon. They managed to escape with Nene’s Monitamon attack, causing the team to separated into three groups with Zenjirō and Nene learning the Raremon are the prisoners transformed. Furthermore, Cutemon’s parents are nowhere to be found as the nearly complete Breakdramon emerges. Shoutmon ×5 is then formed to fight the robotic dragon before Matadormon appears with Cutemon’s parents as hostages, forcing Xros Heart to step down with Shoutmon ×5 being attacked nearly to death. However, through his parents’ telepathic request, Cutemon heals Shoutmon ×5 as he proceeds to destroy both Breakdramon and Matadormon, with Cutemon’s parent being rescued. 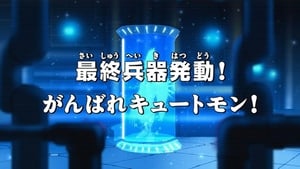