Embark on a New Adventure!! Decisive Battle in Tokyo!!

Ending up back in their world, Taiki, Akari and Zenjirō learn that their time in the Digital World was about half a day in human world time and both of Taiki and Akari’s family members have no faith on their words. Taiki later hears the voice who had granted him the Xros Loader, though is unable to find it. The next day, Taiki meet up with Akari and Zenjirō, telling them his intention to go back to the Digital World and save their friends over there. The voice eventually respond to his words leading them to it, revealed to be the DigiMemory of Omegamon. After fully materialising Shoutmon and explaining the origin of the DigiMemories, Omegamon reveals he has the power to return Taiki to the Digital World, but Akari and Zenjirō must stay behind. Just then, Tactimon, who was trapped in the real world and attacking the city, uses the electricity to give himself form and chase over Taiki. 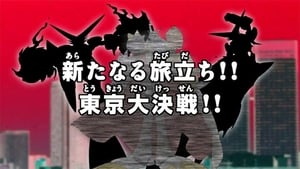