To a New World! The Blazing General's Dragon Land

Taiki and Shoutmon return to the Digital World and land in Dragon Land, knowing that through Lilymon (Shoutmon’s old village mate) that there are no longer Zones as the Digital World has been reformated into one floating island where Bagramon reigns from, with seven surrounding Lands, each ruled by DarkKnightmon’s Death Generals. Taiki and Shoutmon encounter Dracomon, saving him from a mob of dinosaur and dragon Digimon led by Devidramon. Meanwhile, Kiriha arrives and launches an attack at the Bagra Army’s Dragon Land branch while calling out the first Death General, Dorbickmon. Answering Kiriha’s challenge, having taking out the bulk of Blue Flare with a pit trap, Dorbickmon arrives in his Darkness Mode and uses his Darkness Loader to Forced DigiXros his Flarerizamon into a flaming sword to easily defeat DeckerGreymon. With some help from Lilymon and Dracomon, Taiki manages to get Kiriha away from Dorbickmon’s attack. 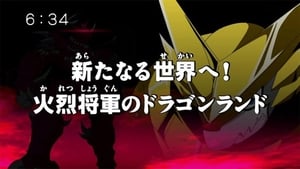