With OmegaShoutmon trapped, Dorbickmon DigiXros with Fanglongmon to assume his Darkness Mode, and easily reverts OmegaShoutmon to his rookie form. Before Dorbickmon can destroy Taiki and others, Nene shows up and uses a plant-like smokescreen before retrieving the rest out of harm. At her camp, Nene reveals that she and the Monitamon have been disguising themselves as plants to gather information. Meanwhile, Dorbickmon uses the captured Xros Heart member as a bait to force Taki to reveal himself. The next day, Taiki shows up in front of Dorbickmon. However, he acts as a distraction, allowing Dracomon to flood the area while Shoutmon saves their allies. Infuriated, Dorbickmon DigiXros all his minions to become the winged giant Dorbickmon. Safely placing the allies into his Xros Loader, Taiki forms Shoutmon ×5B to fight Dorbickmon but was defeated by Dorbickmon’s power. Dorbickmon then grabs Dracomon and attempts to crush him but is stopped by Kiriha, who arrives with MetalGreymon. 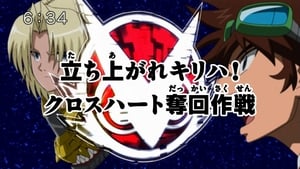