Shivers down the Spine! The Moonlight General's Vampire Land

With Dorbickmon defeated, Taiki and the rest end up on another Land where they managed to free a Lopmon who being chased by three LadyDevimon. Later, Lopmon reveals that the place where they are now is Vampire Land and that many of his kind have been captured to the Land’s Death General’s castle for some reason. Taiki and Nene decide to sneak into the castle disguised as Lady Devimon, and Cutemon disguised as a Lopmon, to take out the castle’s barrier. Found out, things go from bad to worst when Taiki encounters NeoVamdemon (Bagramon’s second Death General) as Lopmon manages to destroy the barrier, with Shoutmon ×5 unable to fight the stronger Death General. The battle then took over by Kiriha yet the unharmed NeoVamdemon then uses his Darkness Loader to Forced DigiXros with his Devimon and LadyDevimon armies to assume Darkness Mode before executing another DigiXros with MetalGreymon, leaving everyone, especially Kiriha, an unexpected shock. 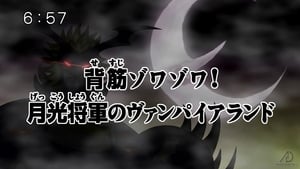