After Zamielmon escapes, Xros Heart learns from Ignitemon that the Death General’s current size was the result of him consuming the DigiHoney created from the energy stolen from his Digimon victims. With this knowledge, Taiki get an idea that he could defeat Zamielmon if they managed get him restore back to his original size. Then, an invitation of Zamielmon to his Tanemon Floramon playground give Taiki the chance to achieve their goal. While Taiki and Nene go to the playground to stall Zamielmon, Kiriha heads to Zamielmon’s lair and destroys all the DigiHoney with Beelzebumon and Ignitemon assisting him. Though the plan worked, the team did not expect Zamielmon’s true size to be gigantic as Shoutmon DX is unable to fight against the fast-moving opponent. However, thanks to JetMervamon, Zamielmon is stopped in front of his lair and allowed Shoutmon DX to finish him off. 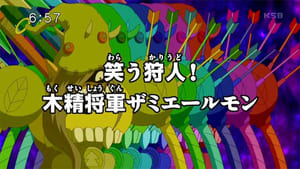