Having heard from Kiriha that he saw a boy who resembled her younger brother, Nene is eager to search for Yū, only to find him and learn that he has been willingly helping DarkKnightmon the entire time. Yū and Tuwarmon then take their leave when Taiki and the others come to her aid, with Nene chasing after her brother. However, Yū summons Doumon to cast a spell on Nene, giving her the delusion of being back in the human world. Tuwarmon whom about to kill Nene was stopped by Mervamon, who emerged from Nene’s Xros Loader. Taiki and Kiriha then discovered Nene’s exact location and break the illusion as DarkKnightmon appears with Lilithmon (who later been DigiXros with Blastmon and the Vilemon as Gattai Lilithmon by Yū using his Darkness Loader). A chaotic fight soon follows with Doumon destroyed as Yū DigiXros Tuwarmon onto DarkKnightmon for the latter to become MusouKnightmon. OmegaShoutmon and ZeekGreymon are fight in retaliation and the three Digimons’ power causes a big bang. 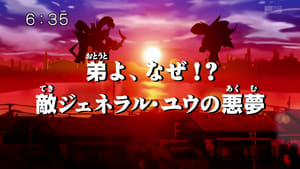