The Mysterious Cyber Land! The Beauty of Fullmetal City

Xros Heart arrives in the futuristic Kingdom, Cyber Land, where they are attacked by an army of Andromon emerging from a Whamon. However, upon defeating them, the gang realize they are only puppet-replicas. Deciding to stop it at the source, Taiki and his companions enter the Whamon-like spaceship and discover a strange girl kept in a capsule within it. Introducing herself as Ruka, she explains that she captured by the Bagra Army. Despite Dorulumon being reluctant to trust her, Taiki and the others quickly accept her into their group as she leads them out from the spaceship. However, Dorulumon soon gets separated from the others because of chasing over Ruka and encounters Cutemon, who is acting strangely. However, the Cutemon turns out to be the fourth Death General known as Splashmon, who possesses the ability to assume any form. Capturing Dorulumon in his trap, Splashmon reveals that his puppets, Ruka among them, are controlled by creatures created by him, called Drippins. 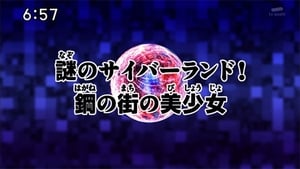