With Dorulumon captured, Splashmon assumes his captive’s form to make members of Xros Hearts Team doubt one another, in order to create more negative energy for Bagramon, causing Kiriha to break from the team. From there, Splashmon captures Nene and assumes her form into tricking Taiki, Shoutmon, and Ballistamon into a death trap. The Death General then assumes Taiki’s form to mess with Kiriha, only to see the deception has no effect and forces Splashmon to kill him personally. However, Taiki arrives, revealing that he knew it was Splashmon the entire time and played along while Dorulumon and Nene were freed. Furious that his plan to turn Xros Heart on itself failed, Splashmon DigiXros all his Drippins to assume Darkness Mode before easily defeating MetalGreymon and being unharmed by Shoutmon ×4 and Jet Mervamon’s attack. After revealing his true water-tiger form, Splashmon overpowers Omega Shoutmon and Zeek Greymon. 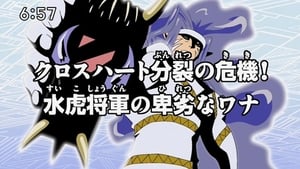