After landing on the Gold Land which contains a wide Golden Sea, Xros Hearts found no traces of the Death General, until a pirate ship rises from underwater, revealing the fifth Death General, Olegmon the Golden Thief. Admiring their tenacity, Olegmon offers Xros Heart to join his crew. However, the team refuses and starts attacking Olegmon, only to give Olegmon the chance to force Shoutmon and majority of the Xros Heart members in becoming his minions by casting a spell on them. Thanks to Ballistamon, Taiki and the remaining members manage to escape. Intent on freeing the others, Ballistamon discloses the secret to break Olegmon’s spell. After breaking free from the spell, the enraged Shoutmon manages to digivolve to OmegaShoutmon and battles against Olegmon. However, captured by his crew, Olegmon reveals Ballistamon to be one of his most dangerous servants, forcing Ballistamon to transform back to his original form, DarkVolumon. 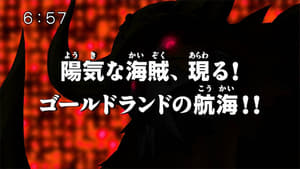