Xros Heart arrives to Canyon Land where the Earth-god General Gravimon, having learned of his fellow Death Generals’ defeat, has ordered all his forces to gather around his fortress. Planning to use his group as a diversion for Xros Heart to take the castle by surprise, a plan that Taiki accepts, Kiriha finally reveals he came to the Digital World to become strong. However, once he and ZeekGreymon manage to storm the castle while using their Blue Flare team to take out the Death General’s force, Gravimon reveals that he was a step ahead the entire time. Despite having JetMervamon help the Xros Heart United Army escape, Taiki learns that Kiriha is captured. And, to make things worst, Gravimon uses Kiriha’s shady past to turn him into his pawn to defeat Taiki. 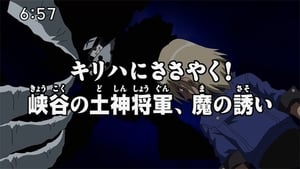