The Final Kingdom, the Shining Sun of Bright Land!

Taiki and others arrive in the last Kingdom in the Digital World, Bright Land. They start heading towards the country’s tower but Sparrowmon informs that some force field has prevents them to entering it from the sky. On their way, they encounter and attempt to help the country’s digimon that was pinned down to the ground by big spikes but was told that only Apollomon (the last Death General) can remove them. Suddenly, Apollomon’s army appears, commencing a battle. Learns from the Xros Heart’s strenght, the Death General grants them an audience with him on the tower’s garden. Instead setting off a fight, Apollomon offers himself to assist the Xros Heart into defeating Bagramon, stopping the ultimate day of destruction ‘D5’. Though Taiki believes they can trust Apollomon, it took the Digimon to save the boy’s life to convince Kiriha and Nene. 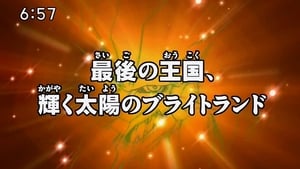