Taiki VS. Yuu, Showdown of the Boy Generals!!

Taiki ends up facing Yuu in a sword fight and is losing against him. By then, Whispered appears and reports of Kiriha’s defeat along with DarkKnightmon and Lilithmon chasing Nene, Shoutmon ×5, Beelzebumon and Mervamon. Yuu then reveals how he got to the Digital World and his encountering with DarkKnightmon, making the boy to unfold his true nature. Realizing the truth behind the facade, Taiki picks himself up and defeats Yuu while convincing that what DarkKnightmon said was nothing but lies. But, even with Nene’s attempt to further convince him, Yuu refuses to believe and instead DigiXros DeadlyAxemon, all of Apollomon’s minions and Hell’s fields’ evil energy into Tuwarmon, assuming Deadly Tuwarmon Hell Mode. However, as the Xros Heart members gathered to form Shoutmon ×7 and cause some damages on Tuwarmon, Yuu begins to self doubt his faith in DarkKnightmon. Badly injured, Tuwarmon along with Yuu is forced to withdraw from the battle, who then asks him if Taiki is telling the truth. 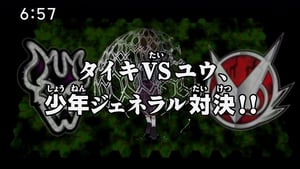