SkullKnightmon along with Yuu escaped from Hell’s Field and headed back to the Great Demonic Palace, while Taiki and the others safely reached the Bright Land’s surface. Wisemon soon managed to analyze that Apollomon is still conscious despite Whispered being in control. As Kiriha and Nene hold off Apollomon’s army, Taiki and his Digimon make their way to Apollomon’s shrine. But, as they reach the top, Whispered posed as Apollomon in an attempt to kill Taiki while his guard is down. However, seeing though the deception, Taiki uses OmegaShoutmon to strike the Death General as Kiriha and Nene arrive to form Shoutmon ×7 and the epic battle with Whispered begins. However, after sealing Shoutmon ×7, Whispered starts to collect energy to execute an attack that would destroy all of Bright Land. Though Dracomon and Mervamon free him, Shoutmon ×7 unable to hold the attack off. 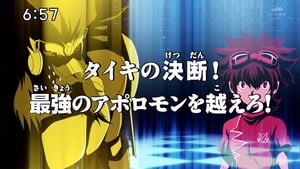