For the Sake of the Future of the Digital World! Friendship with the Death Generals!

In Prison Land, the Death Generals defeated Shoutmon ×3 so easily, but moved by this act of self-sacrifice, Olegmon switch sides to support Taiki against his former teammates, while Apollomon is separated from Whispered to settle their very own battle. At that time, having no intention of keeping his word to Taiki to spare the others, DarkKnightmon has GrandGeneramon to defeat Kiriha and Nene. Later, Apollomon sacrifice himself to help Taiki and his Digimon along with Olegmon in restoring themselves. However, Olegmon died again in the process when the Xros Heart team destroyed the incomplete GrandGeneramon. With their fight against the Death Generals truly over, Taiki and the others head to the actual Pandemonia to face Bagramon and DarkKnightmon while rescuing Yū. 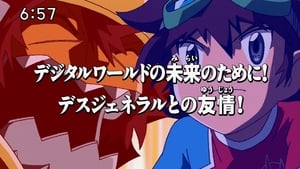