Bagra Brothers! The Bonds of Darkness

In the Pandemonia, Yū is captured and his power is collected, while Taiki and others finally meet Bagramon and DarkKnightmon outside the palace. Bagramon, who has absorb the Dark Stone, appears before the Xros Heart and reveal the meaning behind D5. Using Jatetsufūjinmaru (Tactimon’s sword, that fell into the ocean after his battle with OmegaShoutmon.) as a homing beacon, Bagramon opens a rift into the human world and freeze everything in the vicinity of his extended arm as all energy is drained with Akari and Zenjirō are saved by a mysterious voice. In midst of chaos, Taiki and Mervamon fall into the underground. Meanwhile, Kiriha has OmegaShoutmon and ZeekGreymon to battle against Bagramon. Taking advantage of the distraction, DarkKnightmon stabs Bagramon from the back and proceeds to forced DigiXros, absorbing his brother’s power. 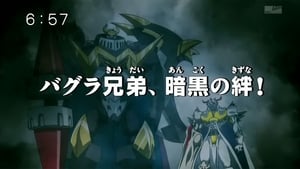