Approaching! The Last Day of the Human World, D5

After DarkKnightmon absorbed his brother Bagramon in a DigiXros, he reveals that he unsealed the Darkness Loader and used the Amano siblings in order to eventually overthrow Bagramon and become the new ruler of the Digital World. Meanwhile, Taiki managed to rescue Yū from the enlarged Tyutyumon, who was devoured by Bastemon. Taiki then rejoin the rest and brings Yū back to Nene. DarkKnightmon’s new form is then confronted by Shoutmon ×7. However, after metaphysically destroying DarkKnightmon, Bagramon takes control of his brother’s body and reconfigures it into DarknessBagramon, who then deletes his surroundings and heads into the human world where everything is turned to stone. In the process, he kills Shoutmon and sends the others into a void. Once being trapped there, Taiki and the others were saved by Akari and Zenjirō, who were transported by the power of two DigiMemories (WarGreymon and Examon) that come to life, proposing a way to bring Shoutmon back and save both worlds. 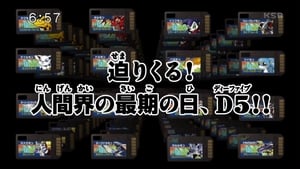