It's Revealed Now! The Secret of Digimon Hunt

What seemed to be a normal day for Tagiru goes awry when his school is being absorbed into DigiQuartz before finding a Tsumemon that Digivolves into Keramon. When Ryoma arrives, Keramon Super Evolves to Chrysalimon as Arresterdramon and Astamon respectively Xros Up with Ogremon and Triceramon. However, Chrysalimon spreads DigiQuartz to Tagiru’s house, making his mom and dad disappear among with other people. Hearing from Ryoma that the rest of the world would follow if this continues, revealing how he got caught up with Digimon, Taiki’s group and Ryoma’s group join forces to free the kidnapped victims and join the others as they demand answers from a non compliant Old Clock Store Owner. By that time, Chrysalimon Super Evolved to Infermon and overpowering the Hunters’ Digimon until Tagiru and Ryoma execute a Double Xros between Arresterdramon and Astamon. 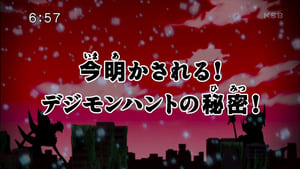