The Xros Heart boys join the school’s kendo club for the regional tournament and after winning a match, they find that they are being observed by Musashi Kenzaki, a student from a rival school. Later, Musashi ends up in the DigiQuartz and meets Kotemon who takes him as his pupil. Some time later, a mysterious figure starts challenging members from adult kendo clubs throughout the city and beats them to the point of shredding up their clothes. Tagiru and the others figure out that this incident could be Digimon related and investigate by themselves until they find that the mysterious attacker is actually Musashi. Tagiru challenges Musashi for a match and he sees a second blade appearing on his other hand for an instant to block his attack. Musashi flees and Kotemon appears, offering himself to train Tagiru asking him to help bring Musashi to stop following the dark path he is taking. 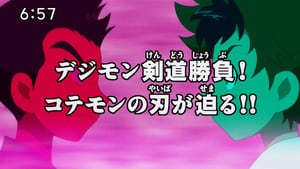