While Tagiru is hunting Zenimon, he has discovered that a mysterious teen named Hideaki Mashimo suddenly appears with a blue-eyed Dobermon and is blocking his way at the Shopping District. Zenimon is a Digimon who likes money a lot and whenever it sits on an ATM machine, the machine will not function properly. In order to overcome this abnormal situation in the street, Hideaki is hunting the Zenimon to get a reward from the shop owner. His main objective is to earn money rather than hunting down the Digimon. His dream is own a takoyaki shop and he is hunting Digimon to save up the money at the same time. Digimon hunting solo is dangerous and he decides to team up with Tagiru, promising that he will share the reward with him. Surprisingly, Tagiru, Hideaki, Dobermon and Gumdramon have encountered a new Digimon named Ganemon. Ganemon is Zenimon’s boss and he is trying to capture back the Zenimon, and Ko-Zenimon (a smaller form of Zenimon), who have escaped from his briefcase. 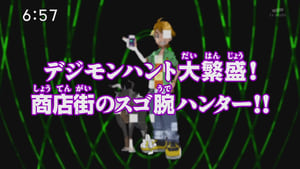