Sword and Sophie stop in a western town, Sun Dell Dios, while they wait for reinforcements. However the town is run by a vigilante group led by the sheriff Alfil. The townspeople try to take Sword into custody because they believe he kidnapped Sophie, while the waitress, Natalia, grabs Sophie and Alfil drives them out of town. When Natalia tries to sedate Sophie, she causes the car to crash. Back in town, Sword runs from the townspeople, unwilling to harm humans, and is eventually rescued by the arrival of Gina. Meanwhile Alfil reveals that he is a Horror and prepares to take Sophie captive, but she shoots him before he changes, and gains a reprieve until Sword arrives. While Sword fights the Horror Alfil, Bishop appears and prepares to take Sophie whom he calls princess, but again Gina comes to the rescue. Realizing the usefulness of the town has ended, Bishop reduces it to dust, however Gina had taken the precaution of placing a barrier around the townspeople so they were saved. As Sword, Gina and Sophie prepare to continue their journey, Zaruba compliments Sophie on her resourcefulness. 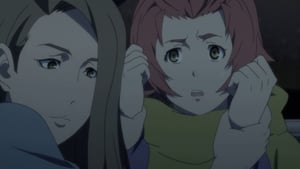