A stranger, looking for his friend, stays the night in a remote, run-down roadside motel, but a Horror violently kills him. Meanwhile Sword, Sophie and Gina drive through another ruined and rough western town. They arrive at the same motel where they decide to stay after days of sleeping rough. While there, Sophie meets a teenage boy, George, the lonely son of the owner Matthew and his wife. As Gina and Sophie take a bath, a liquid-based Horror attacks them, but Gina drives it off. Later, Matthew’s wife discovers that her husband made a pact with the Horror to ensure the family’s financial survival. Matthew wishes to return to Russell City and become a success, but instead, the Horror engulfs him and then attacks his wife. She is saved by Sword who, together with Gina, attacks and destroys the Horror. Before moving on, Gina rewrites wife and son’s memories to eliminate their experience, believing instead that a tornado caused the destruction and Matthew’s death. 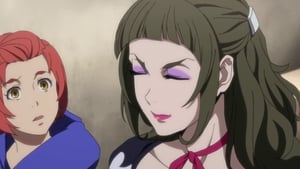