Luke arrives in a town after being sent by the Land of Guidance and visits an old man and his granddaughter Stella with a Makai Alchemist symbol on their door. Stella, an avid researcher of the occult, tells him the legend of a Demon Sealer who sealed a demon nearby many years ago. Apparently the seal has weakened and the demon is about to awaken with the impending full moon. They take him to the place where a statue of the Demon Sealer once stood and with Luke’s help, locate a sea cave where the demon was sealed. Luke identifies it as a Knight that became a Horror. The next night, Luke goes to the cave to prevent the Horror from reappearing and Stella follows him. The powerful Horror awakes and Luke tries to fight him with all the weapons at his disposal, including the spirits of those the demon defeated in the past and he manages to destroy it. As he leaves, Luke wipes their memories of the previous night’s events. 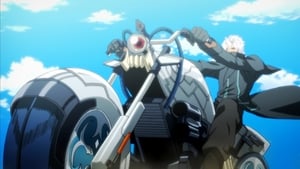