Sword, Gina and Sophie arrive at a seaside town, but Sophie is angry at Sword for eating her chocolate without permission. During the day, Sword saves a boy named Pedro from some thugs whom he blames for the death of his girlfriend Monica. Pedro ask for Sword’s help but Sword refuses as he recalls the death of his own sister in an explosion the research facility of Signa Slam Tech and the fruitlessness of revenge. Pedro again gets beaten up, and Sword again rescues him, chasing off the bully. As they prepare to leave the town, Sword gives Sophie a present of chocolate and her anger dissipates. 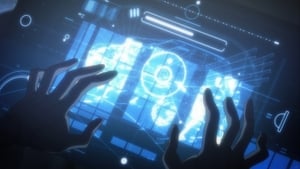