As Sword, Gina and Sophie approach El Sanvados, they are confronted by a battalion of Horror bikers. Sword attacks them, sending Gina and Sophie ahead by another route in the car. However Bishop sets up a Horror Barrier darkening the sky, and follows Gina and Sophie with a wave of flying Horrors. They are almost caught, but Luke arrives just in time, destroying the Horrors and breaking the barrier. Suddenly a new monster emerges from below the ground and captures Sophie just as Sword arrives on his motorcycle. Sword rescues Sophie and then Zaruba carries her away to safety on the motorcycle. Sophie is distressed at the trouble that she has caused her companions, but Zaruba tells her to keep moving forward. When they are caught by Knight, Zaruba crashes the motorcycle into Knight, sacrificing himself. Sword, Gina and Luke catch up with Sophie and Luke absorbs the remaining power of the Madou ring in preparation for a showdown between the Makai Knights. However, after testing Sword’s powers, Knight withdraws leaving Sophie and the others to mourn the loss of Zaruba. 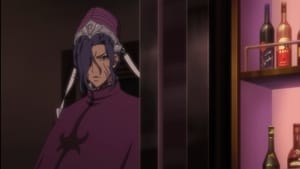