Sword protects Sophie while Luke confronts Knight and an all-out battle ensues between them. Luke recalls when he was a trainee and the Silver Knight his teacher, before he became the Dark Knight. The fight continues, but Dark Knight is too strong and impales Luke with his Naginata. Sword then attacks Dark Knight and they both turn into their Makai Knight forms and continue the battle. Meanwhile Feilong’s people set up a magical barrier around the knights to protect the city and prepare to evacuate Sophie. As Meifong takes Sophie to a safe underground shelter, they are intercepted by a Horror, but Meifong manages to defeat it with a magic talisman. The battle between the knights takes on epic proportions with entire buildings being destroyed in the process. Eventually they confront each other without weapons, but as Sword gains the upper hand, Dark Knight departs, vowing to return. 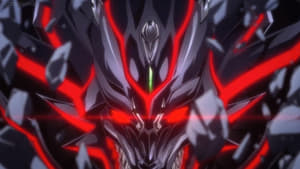