Aaya kidnaps Kiiko and keeps her in the gym storage and rapes her after learning what she did. After being let go, Kiiko is still unwilling to forgive Aaya. Some time later, after Aaya learns of her brother’s death, she brings Kiiko to her house, asking her to make love with her one more time before she leaves Japan. That night, Kiiko gets a glimpse of Aaya’s memories in which she learns that Kōta had a terminal disease and manipulated Aaya into having sex with him before his operation, where he died. As Kiiko realizes the truth and finds Aaya is gone, her powers bring her straight to her, now knowing she can teleport and look into the past and future, and where she expresses her desire to have Aaya by her side forever. Reconciling their feelings, the two warp away together off the plane and end up on a distant planet where they express their wish to spend their lives together. 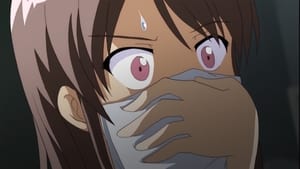