This Love... Is Being Turned Into a Shojo Manga

Chiyo Sakura, age 16, tells her crush Umetaro Nozaki that she is his fan, but he responds by giving her his autograph. She then says she wants to be with him always, so Nozaki invites her home and gives her some “beta work”, which after several hours, she realizes she is doing inking for him. She realizes he is a shojo manga artist who is published in a magazine she has bought. Later, they think of romance ideas such as making a guy a delinquent but should obey the laws, and taking a girl home with a bicycle. Nozaki invites Sakura home but he has a tandem bicycle, so they see if any of the situations are conducive to romance. After seeing him interact with some cats, Sakura tries to confess her love again, but gets another autograph. Nozaki introduces Sakura to his friend. 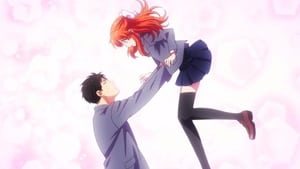