Violence vs. the Prince

Mikoshiba introduces to Sakura and Nozaki his best friend, Yū Kashima, who is known as the school prince, but is actually a girl. She is a member of the acting club and is really popular among the girls. However, she is a bit dense and acts idiotic sometimes that her senior at acting club Masayuki Hori will scold and even physically beat her. After helping Hori paint some sets, Sakura discovers that he is the one who does backgrounds for Nozaki’s manga. When Mashima sees Hori with Nozaki, she gets a bit jealous. Nozaki later has Hori and Sakura role-play some parts, during which Mikoshiba also gets involved. 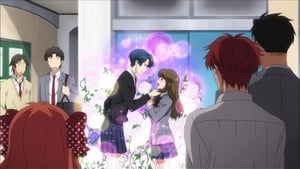