I'll Cast a Spell on You

Nozaki sees Hirotaka Wakamatsu, his junior from middle school when they were on the basketball club. Wakamatsu tells Nozaki about being stressed out and unable to sleep because of Seo’s antics, however, when he hears a recording of Lorelei’s singing, he immediately falls asleep and feels refreshed. Using Nozaki’s shōjo manga as a basis, he confronts Seo, but she interprets his actions as gestures of friendship. Later on, Nozaki gets a fever and sends the text message “SOS” to Hori, Sakura, and Wakamatsu. The three team up to help Nozaki with his manga, but are challenged with the task of applying screentones. 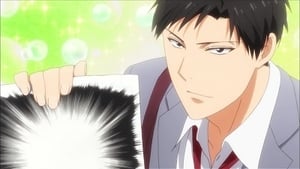