With Chitoge’s inclusion into their cast, the play commences with Shu as the narrator taking their performance into a comedic turn, adding nonsensical subplots into the play’s story for the enjoyment of the audience but for the chagrin to some of its casts. Nevertheless, the play finishes, gaining warm admiration from the audience while Chitoge recognizes her true love for Raku. With their usual relationship back in place, Chitoge apologizes to Raku for her harsh behavior and adds that she will still be herself in front of him. During a conversation with Kosaki, Raku takes notice of Kosaki’s desire of playing the role of Juliet. To compensate for not having played her role, as a result Raku and Kosaki reprise their roles as Romeo and Juliet respectively and did a private play for themselves as Chitoge looks into the horizon and remarks the conclusion of their memorable cultural festival. 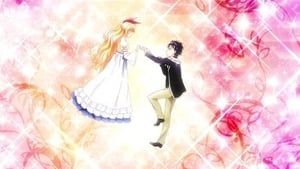