As the battle progresses, Rikuo makes his way up the commander of the enemy side; Tamazaki. The two spar for a bit, but Rikuo is finally brought to his knees as one of Tamazaki’s demons (Yosuzume) sneaks up and touches him, therefore making everything seem dark, blinding him. At the same time, Tsurara hurridly searches for Rikuo, whom she lost at the beginning of the battle. Tamazaki asks Rikuo to join him, but Rikuo refuses. In rage, Tamazaki tries to kill Rikuo, attempting to slice him. Just in the nick of time, Tsurara intervines, blocking his blow. Yosuzume then touches Tsurara, blinding her as well as the rest of the battling yokai. Then Tsurara and Rikou then work together to defeat them, Tsurara being the one to finish it and breaking the spell by freezing Yosuzume. 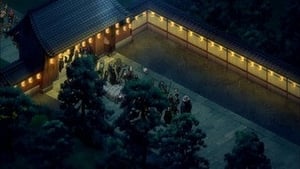