Gyuki who was known as Umewakamaru while he was human, past is revealed. Umewakamaru is a noble child who excels at everything but after his father dies his mother leaves him at a monastery. News of his mother’s illness prompts Umewakamaru to want to see her. On the way he is tricked by demons into going the wrong way. There he finds out his mother has been devoured by the youkai Gyuki. Umewakamaru goes mad with grief and kills the demon Gyuki and in this state he takes to killing other travelers. In time he also comes to be known as Gyuki. It is here that Rikuo’s father meets him for the first time and after defeating him in battle requests that he join them as a member of their family. 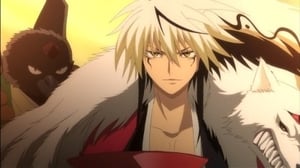