Kaede introduces Haruka and Yuu to Sumi Otokawa, who is to succeed Mitsuki as student council president, who asks for their help in deciding what to do for Mitsuki and student vice-president Rina Sakai for their graduation. The three of them decide to investigate the third years, finding them have a peculiar fondness for pudding, deciding on holding a ‘bucket pudding contest’. After Sumi takes her leave, Mitsuki and Rina walk in on Haruka and Yuu kissing each other. Despite Mitsuki forbidding Haruka from kissing Yuu and having Kaede keep an eye on them, Haruka finds ways to sneak some kisses in during dance classes. Meanwhile, after speaking with Sumi, Mitsuki comes to the realization that she herself is in love with Haruka. 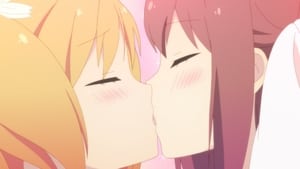