The President is My Sister / A Pool Cleaning Promise

Yuu’s older sister, Mitsuki, who has never met Haruka face to face before, ends up having her glasses broken due to Yuu. Meanwhile, Yuu becomes downhearted when she learns the sports festival is being downsized to a sports meet due to the school closing in three years, meaning she won’t be able to do a cheering event. Wanting to help Yuu out, Haruka and the others join the meet committee to state their case to the student council, led by Mitsuki. Despite some initial failure, Haruka manages to build up the courage to state her plea to Mitsuki, who considers it. Later that day, however, Mitsuki comes across Haruka and Yuu in a compromising situation. Later, the girls get together to clean the pool, with Haruka and Yuu finding an opportunity to do some kissing in the pool storage. 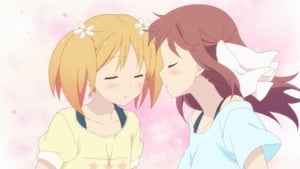