Let's Have Tea With Big Sis / The Witch, The Apple, and The Big Sister

With the cultural festival approaching, Haruka, Kaede, and Yuzu go to a café with Mitsuki to try and convince her to join in their class’ production of Snow White. When the others arrive, Yuu displays some displeasure in having been left behind at school, due to Haruka wanting to surprise her, but the two manage to make up with each other. Later, the girls succeed in coercing Mitsuki into playing the role of Snow White, where she becomes paranoid about being kissed by Haruka during rehearsal, only to realise it was only a speech-only play. 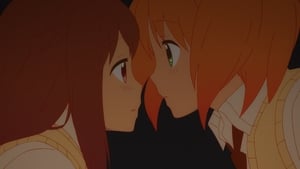